A Nearly Transparent Home in Utah

This monumental design ensures dramatic mountain views from every angle 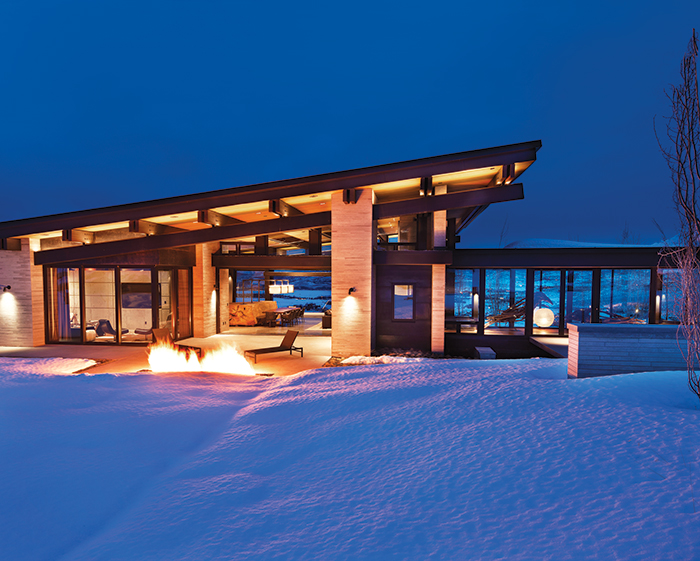 Architect Jack Snow thinks he probably could design a regular old two-story house, but he doesn’t expect to any time soon. “People just don’t call me to do those,” he says. What they do ask him for is bold, sculptural dwellings that rival their mountain surroundings in their ability to inspire awe.

Compared to the rugged precipices that Snow’s Edwards, Colorado-based firm, RKD Architects, is known for building on, this gently sloping 20-acre bluff near Park City Mountain Resort was downright tame. But its views of the Wasatch Mountains to the west and the Uintas to the north are some of the most dramatic the architect has ever attempted to capture.

He began by drawing a few bold lines that mimicked the grandeur of the landscape: three large pods—each with a low, sloped roof—linked by flat-roofed bridge elements. One structure is the garage and a two-bedroom guest wing; another comprises the living, dining and cooking spaces; and the third contains a master suite and a bedroom for each of the homeowners’ three children.

Breaking the house into three distinct structures created more exterior walls to accommodate towering windows. “You never get the same exact view from each place,” Snow says, “and that makes a big difference.” To enhance the experience, he made the north side of each pod a curved, outward-leaning window wall that he says seems ready to “pour the home’s occupants into the valley below.” 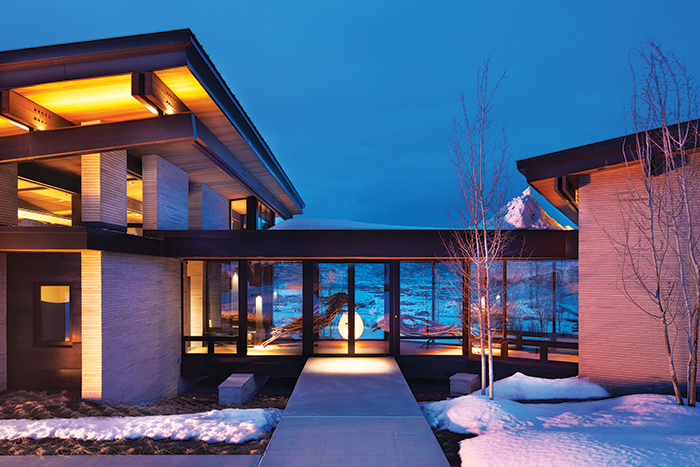 A raised concrete walkway leads to the main entry bridge.

“This is a mountain house; there’s dog fur and mud and mountain bikes and dirty clothes.” — Homeowner

Muscular wood and steel structural components frame the home’s open interiors, to which Snow added a few floor-to-ceiling walls. In the master suite, a fireplace column delineates the sleeping and bathing areas without fully enclosing either space. In the main living pod, a partial wall separates the kitchen from an adjacent sitting room. Other walls disappear entirely, pivoting up in the dining area and sliding away to connect the living and sitting rooms to a south-facing patio.

Her approach to furnishing such serious architecture keeps the mood light: “I love big spaces; I think of them more as jungle gyms,” she says. In the living room, a steel swing chair hangs in a two-story corner of the window wall, and a massive, salvaged eucalyptus tree trunk triples as a room divider, dining bench and custom light fixture. The fun continues in finer details: a guest bathroom’s hand-painted, zigzag-patterned vanity and wall; a 6-foot-long kitchen sink with four faucets; and stair risers engraved with “867-5309”—a nod to the 1981 song stuck in millions of heads.

Lighting designer David Craige’s selections, in contrast, are nearly invisible, though their impact is equally dramatic. Hidden lights illuminate the Douglas fir ceilings and soffits, and tiny bulbs shine on each wood beam where it juts out from beneath the eaves. “There was a lot of focus on lighting the ceilings because the roof forms are such a driving force of the sculpture,” Snow says.

Though the architect often refers to his work as art, he’s ever mindful of his commissioners: “It’s like putting together three variable pieces of a puzzle,” he says. “I’m trying to make an awesome sculpture, but it’s got to function engineering-wise, and it’s got to function for living.”

The homeowner agrees: “This is a mountain house; there’s dog fur and mud and mountain bikes and dirty clothes, so it’s got to be user-friendly—and it is. When we’re here, it’s all just easy.” 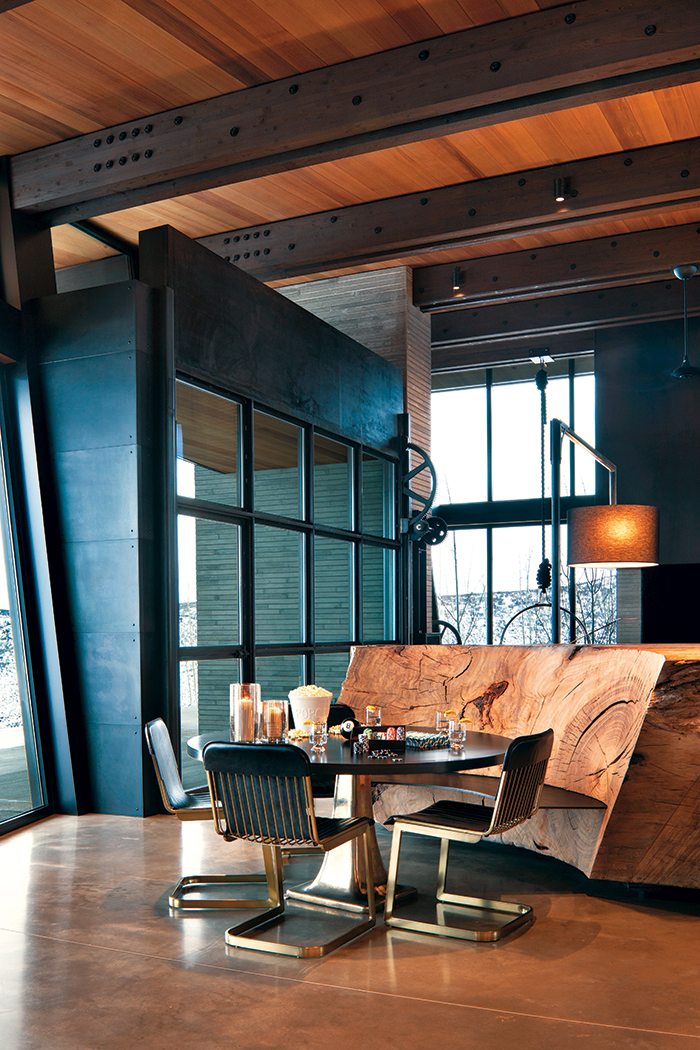 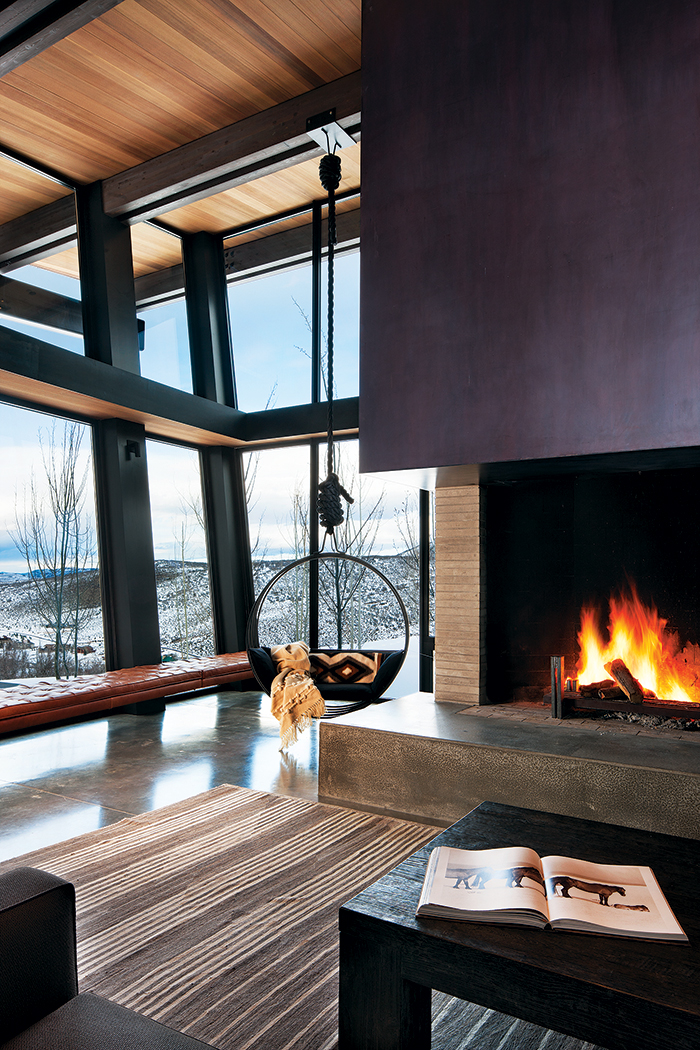 The living room’s Hanging Swing Chair Aux Deux, designed by Erin Martin, and built-in bench are positioned to maximize enjoyment of the view—without blocking it. 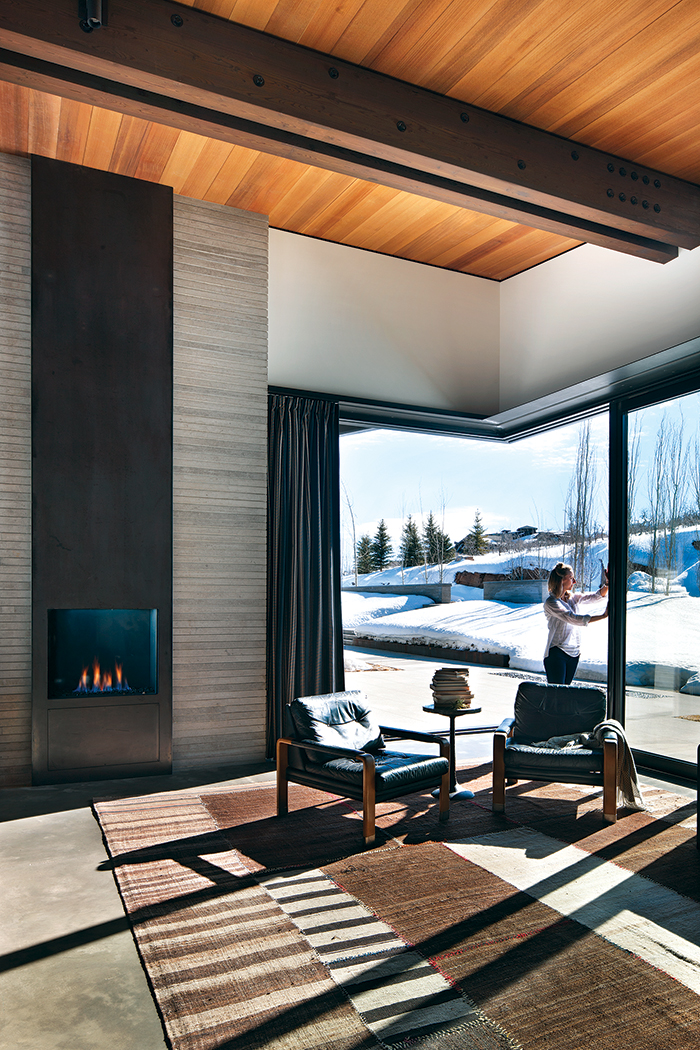 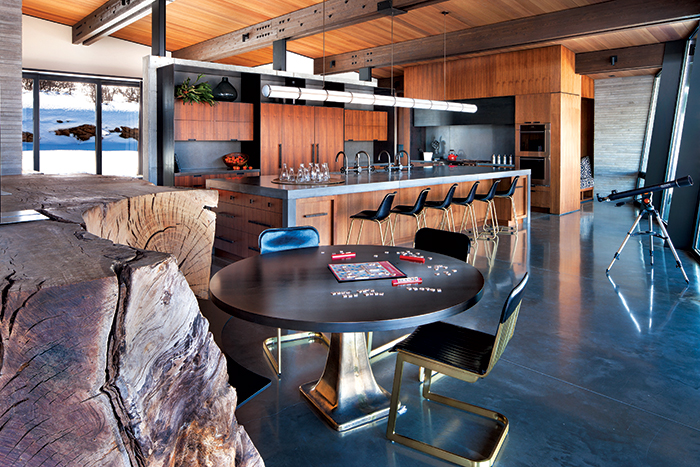 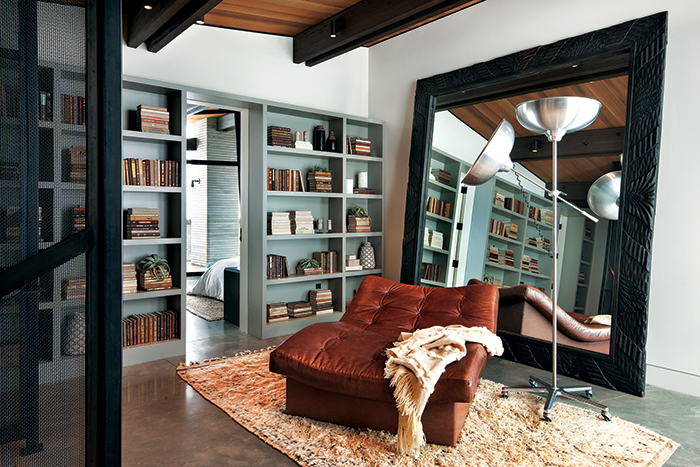 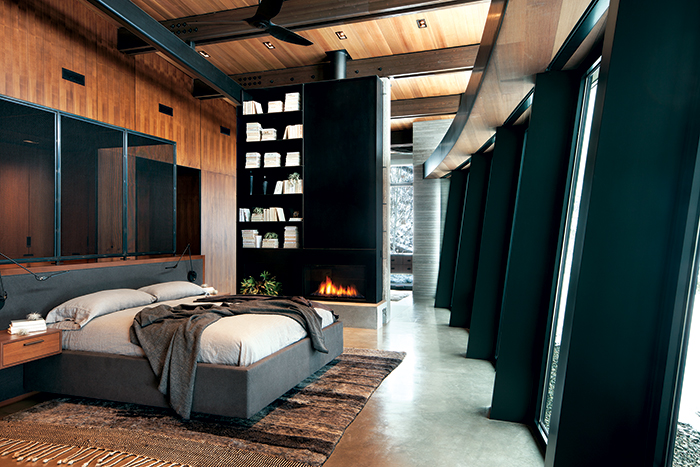 Walnut paneling warms the master bedroom’s austere palette. A metal screen behind the bed separates the sleeping area from the closet. 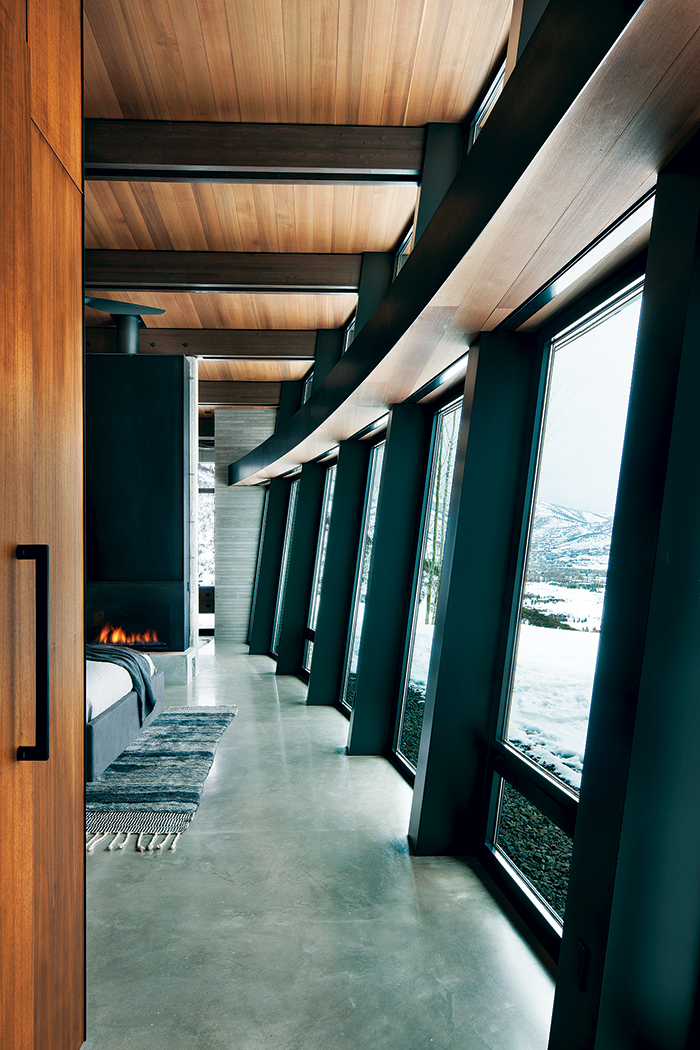 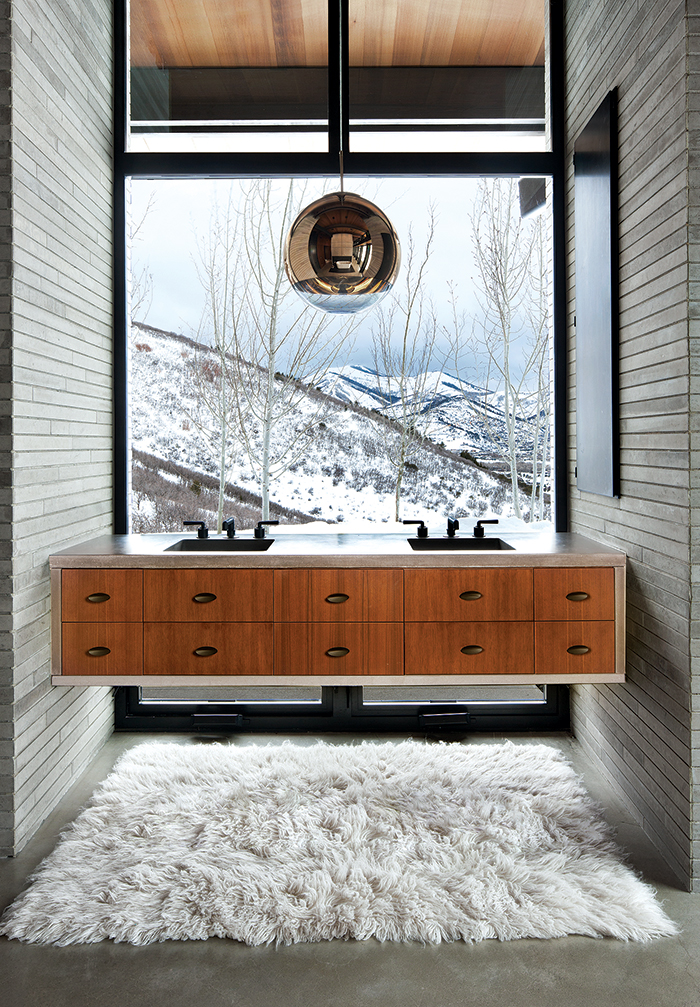 “It was so important that the vanity floated in front of the window to expose the view in full,” Martin says of the master suite’s custom sinks. 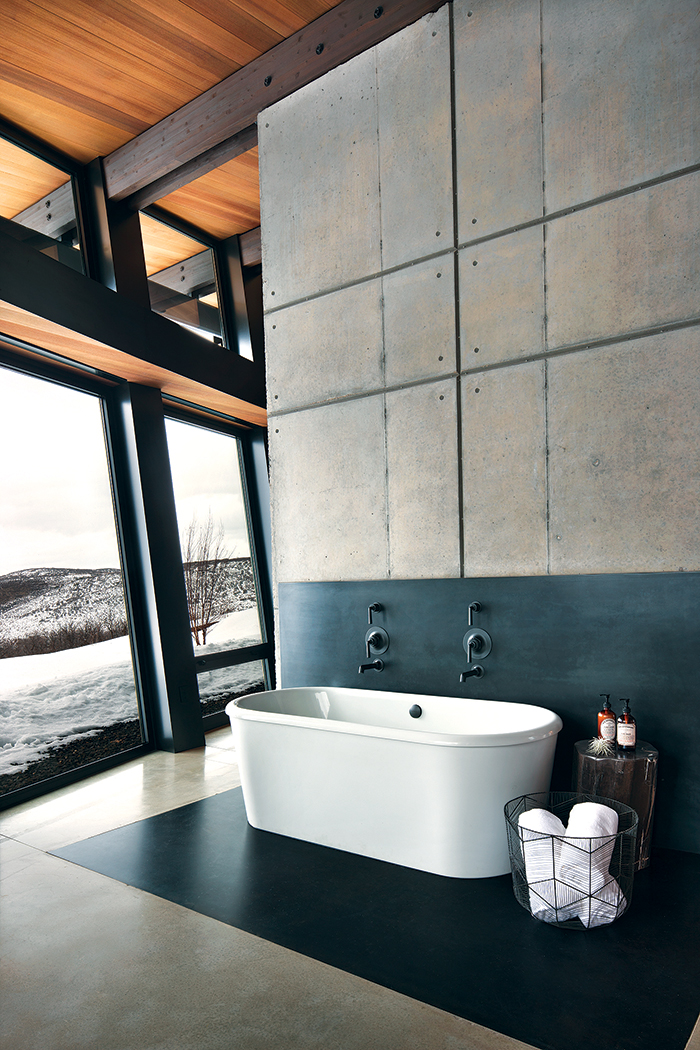